Time for a new project! With the self-isolation going on, it’s good to have something to focus on. So, let’s unleash some creativity.

A while ago, I made a magnetic table lamp as a present. Some time pressure was involved: the whole lamp was developed and built within 10 days. As I was looking for a new project in which I could express some creativity, I decided to make a new version with lots of fancy features. Some ideas: battery power, connectivity and communication, lighting controllable per side, motion detection, …

For this project, termed CubeLamp, I’ll try to post small updates regularly. This provides a good overview of the development process, is a good way to give myself some pressure to document properly, and well, I have something to do ;).

My initial idea for construction is to make a “skeleton” of PCBs, to provide the basis of a cube. The PCB then has multiple functions: mounting the electronics, of course, but also providing reflection (by means of a white silkscreen), use as a sensor, and providing structure / rigidity.

To test this concept, some hands-on work was done. From some blank/bare PCBs, 50x50mm squares were cut, and given a 45 degree chamfer. These are soldered together on the corners. On one corner, I’ve added an 8mm ball bearing (ball?). The idea behind this is similar to the previous version of the lamp: the balls are ferromagnetic, and can be used together with permanent magnets to both connect cubes and conduct electricity. 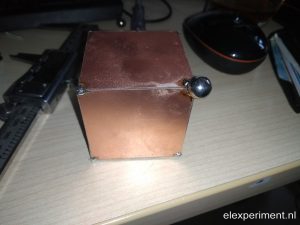 From this early prototype, we learn a few things:

Other than that, for now I think the “PCB cube” concept is quite a good option.